CBD has gained the attention of millions of people around the globe in recent years. What was once a very small niche product used by only a handful of people has exploded into a massively popular homeopathic and natural remedy for many ailments. As a result, it can now be found almost everywhere from the smoke shop on the corner to big-box beauty supply stores and grocery chains around the country. CBD has been reported to be extremely effective in dealing with a wide assortment of conditions from the relatively benign to major life-threatening issues. Users have touted CBD’s ability to manage the symptoms associated with anxiety, depression, chronic pain, insomnia, cancer, epilepsy, Alzheimer’s, Parkinson’s, and many other ailments as well. You may be asking yourself what exactly is CBD and how does it help such a wide array of bothersome conditions. Read on below to find out the answers to these questions and much more!

Contents show
1 What is CBD?
2 Why Are Cannabinoids Important?
3 CBD for Pain Management
4 Ways to Take CBD

CBD is an acronym for the word cannabidiol. Cannabidiol is a compound that is known as a cannabinoid and is primarily found in the Cannabis Sativa plant. This plant may sound familiar to most as it is the same parent plant that marijuana is derived from. Marijuana is known around the world as a plant that produces a euphoric effect known as “high.” This is a product of another cannabinoid called tetrahydrocannabinol, or THC, which marijuana is specifically bred to be very abundant in. However, there is a lesser-known cousin of marijuana that is also derived from the Cannabis Sativa plant called industrial hemp or just simply hemp in most cases. Hemp on the other hand is very high in CBD and very, very low in THC. While THC and CBD are both cannabinoids and molecularly similar they produce slightly different effects. This means that when one uses the hemp plant it does not produce a euphoric effect while still providing the body with several beneficial cannabinoids.

Why Are Cannabinoids Important?

Almost every living thing on this planet has what is called an endocannabinoid system or simply the ECS. The ECS was discovered in the 1990s, while studying the effects of THC on the human body. This system has been linked to a variety of bodily functions such as helping to regulate physiological and cognitive processes, the various activities of the immune system, pain sensation, appetite, memory, mood, and so many more. Essentially the ECS is thought to help control homeostasis throughout the body. In a nutshell, this means that when one system is not performing optimally the ECS will step in and pick up the slack allowing it to function properly. Usually, the body does this using naturally produced endocannabinoids. However, It is believed that more cannabinoids in the body allow the system to operate more effectively, thereby allowing your body to heal itself naturally that much better. This is one of the main reasons it is thought that CBD and other cannabinoids are so effective against such a wide variety of conditions.

To this day one of the most popular uses of CBD is the management of chronic pain. Many millions of people now swear by the therapeutic and beneficial effects of CBD when dealing with pain. This can be everything from arthritic pain to that caused due to soreness from working out too hard. CBD is a very strong tool for dealing with the pain of any kind according to its massive fanbase. Best of all CBD is all-natural, non-habit forming, and has no side effects. This is awesome, especially when compared to invasive surgeries and prescription medications loaded with nasty side effects.

CBD can be taken or used in a variety of ways when it comes to pain management. It can be taken by itself, mixed with food or drink, inhaled, or rubbed into the skin depending on the CBD product itself. CBD oil or distillate continues to be one of the more popular methods, especially when it comes to beginners. However, things like CBD gummies have risen in popularity due to their ease of use and effectiveness. Another increasingly popular option for pain management has become topicals and creams. These are very effective when applied to the skin and will often have a cooling or warming effect as a bonus. However, a little-known secret that is often a better option than topicals is a CBD patch. CBD patches are perfect for administering a dose of CBD right to the needed area over an extended period. For example, if your lower back is a constant bother a CBD patch throughout the day on the problem area could be an all-natural improvement!

If you are looking to buy CBD patches then look no further. Here at Revive, we pride ourselves on bringing you the best CBD patches available on the market. We also have a wide selection of other CBD infused products to fit all of your needs. All of our products are created using the best ingredients that Mother Earth could provide in our vegan, organic, and pesticide-free facility. If you want the healthiest and safest CBD products then be sure to check out the Revive 2.0 difference. Do not hesitate to contact us at Heath@Revive20.com or give us a buzz at 940-217-5521. We would love to hear from you and help you to find the best CBD infused products! 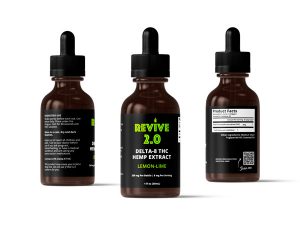